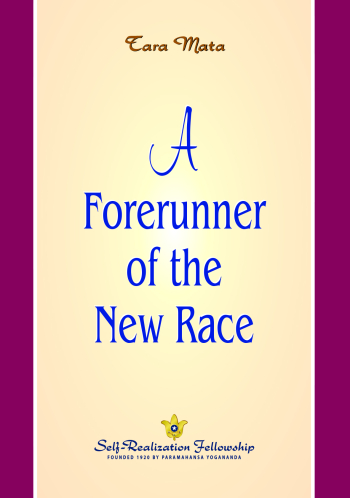 A Forerunner of the New Race — eBook

This ebook is in the industry-standard epub format (version 3) and can be read on most devices with an appropriate ereading app. (Kindle E-ink readers do not support the epub format.) You can also download the ebook directly to your computer and read it using software such as Adobe Digital Editions.

As much as we want to help you with the download and setup of your ebook, there are too many devices and too many options available for us to be able to provide technical support for this process. Please consult the support available for your device for assistance.

Tara Mata was an advanced Kriya Yoga disciple who served as Paramahansa Yogananda’s editor on Autobiography of a Yogi and other works by him from 1924 until her passing in 1971. Not long after Tara Mata had met Paramahansaji in 1924, she wrote this treatise about a “man” who was blessed with the experience of cosmic consciousness. Though she humbly avoided identification with the person mentioned, the experiences Tara Mata describes were her own. She writes: “The fact that there is a technique, such as Self-Realization Fellowship teaches, whereby cosmic consciousness can be attained, is in itself proof that this higher sense is indeed an inherent faculty of all men, needing but the necessary training to call it forth…. Realization that there is a definite way to contact God, a technique usable by all men in all circumstances, has come as such a liberating shock to a number of Self-Realization students that they feel they have undergone a new birth.”

A Forerunner of the New Race is one of a series of booklets presenting inspiring and practical guidance from the teachings of Paramahansa Yogananda, author of Autobiography of a Yogi, on how to live in a spiritually harmonious way—with grace, simplicity, and with an inner equanimity in the face of life’s seeming contradictions.

Tara Mata (1900-1971) was born in San Francisco. She met Paramahansa Yogananda in 1924 and took her final vows as a monastic in 1936. Under the direction of Paramahansa Yogananda, she became editor-in-chief of Self-Realization Fellowship publications and also served on the Board of Directors and as vice-president of the society (1960–1966). She wrote many articles on the science and philosophy of Yoga before her passing in 1971.