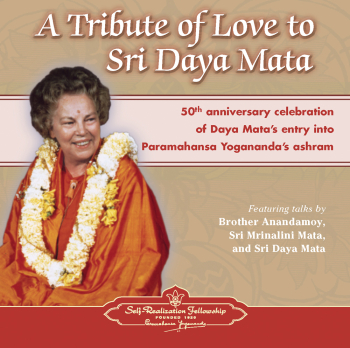 A Tribute of Love to Sri Daya Mata includes excerpts from talks given by Brother Anandamoy, Sri Mrinalini Mata, and Sri Daya Mata at the 50th anniversary celebration of Daya Mata’s entry into Paramahansa Yogananda’s ashram as a monastic disciple, November 20, 1981.

This recording begins with a short talk by Brother Anandamoy. Next, Sri Mrinalini Mata, shares some of the many tributes that had been sent to Sri Daya Mata (SRF President from 1955 until her passing in 2010) from around the world for her anniversary. Then, in the main talk on this recording, Sri Daya Mata herself speaks very movingly of her years as a disciple of Paramahansaji—giving an inspiring personal glimpse of her God-imbued consciousness of divine love, humility, and inner strength that made her so beloved to thousands worldwide.

Sri Daya Mata (1914-2010) was one of the foremost disciples of Paramahansa Yogananda. A true "Mother of Compassion," as her name signifies, she inspired those of all faiths and from all walks of life with the wisdom and great love of God conveyed through her talks, writings, and recordings. She met Paramahansaji in 1931 when he lectured in her hometown of Salt Lake City, Utah; and entered his ashram as a renunciant shortly thereafter. During the more than twenty years that she was privileged to receive Paramahansaji’s spiritual guidance and instruction, he personally prepared her to carry on his worldwide work after his passing. As president and spiritual head of Self-Realization Fellowship/Yogoda Satsanga Society of India for more than fifty-five years (from 1955 until her passing in 2010), she was a guiding force of inspiration, wisdom, and compassion for SRF/YSS monastics and members worldwide.

Karma and Reincarnation: Understanding the Twists and Turns of Life –...
Scroll to top