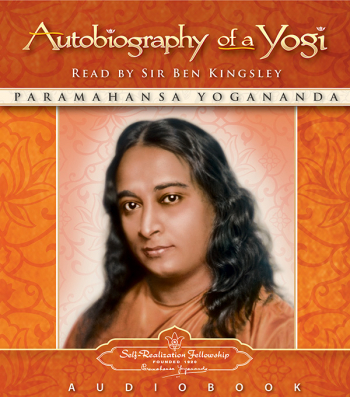 Autobiography of a Yogi — Audio Edition

Acclaimed the world over as a spiritual treasure, this best-selling classic has inspired millions to embark on their own transforming journey to a new and profoundly fulfilling way of life. All the wisdom, humor, and inspiration of Paramahansa Yogananda’s extraordinary life story is unraveled in the immediacy of the spoken word.

Newcomers to the book, as well as those for whom it is a long-treasured companion, will welcome this sensitive and compelling reading by celebrated British actor Sir Ben Kingsley. His subtle dramatization captures the charm of Sri Yogananda’s many colorful anecdotes, bringing to vivid life the author’s rich tapestry of people, experiences, and events, and his illuminating explorations of life’s ultimate mysteries.

This audio edition is unabridged (fifteen CDs), with footnotes included in an accompanying booklet.

Sir Ben Kingsley came to international prominence with his Academy Award-winning performance in the title role of Gandhi. He has received high praise as well for his work in other films — among them the critically acclaimed Schindler’s List. Mr. Kingsley is also known for his inspired readings of books on tape, including a series on the great religions of the world.

Download the audio Autobiography of a Yogi from Audible and iTunes:

“Kingsley is the perfect choice for this material...When he speaks, Yogananda speaks. Particularly moving are the chapters where Yogananda describes miracles performed by his Guru and other saints plus his own visions. They exemplify the universality underlying all religion and spiritual practice.”— Santa Fe Sun