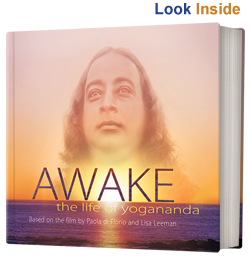 Awake: The Life of Yogananda, the feature documentary produced by CounterPoint Films, is an unconventional biography about Paramahansa Yogananda, who first brought yoga and meditation to the West in the 1920s. Yogananda made ancient Vedic teachings accessible to a modern audience, attracting many followers and inspiring the millions who practice yoga today.
Featuring:
• Over 400 photos, including many of Paramahansa Yogananda previously unpublished.
• Fascinating behind-the-scenes accounts from the filmmakers on the making of Awake
• Interviews with Krishna Das, George Harrison, Deepak Chopra, and many others
• The complete film script, which includes interviews with direct disciples and many others
• Plus additional insights into the life of Paramahansa Yogananda (not in the film)

Attuning Our Lives to the Guru’s Blessings