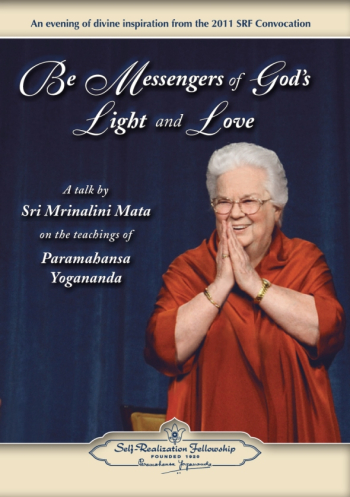 Be Messengers of God’s Light and Love

Sri Mrinalini Mata is one of the close disciples of Paramahansa Yogananda personally chosen and trained by him to help guide his society after his passing. She has dedicated more than sixty years to selflessly serving the Guru’s work. In 2011, Sri Mrinalini Mata became president and spiritual head of Self-Realization Fellowship/Yogoda Satsanga Society of India; and this evening of divine inspiration from the 2011 SRF World Convocation was the first time she spoke at an international gathering of SRF/YSS devotees since becoming president.
Topics include:
• A tribute to the lineage of divine souls responsible for the founding and growth of Self-Realization Fellowship
• The most common question of devotees: “Why am I not making more spiritual progress?”
• How to be the conqueror of one’s self and one’s problems, no matter what our difficulties
• The spiritual efficacy of Kriya Yoga and how its devoted practice bestows assurance of spiritual progress
• Personal reminiscences of her years spent with Paramahansa Yogananda
• An inspiring account of the last days of our late beloved president, Sri Daya Mata

In this beautifully inspiring message, Sri Mrinalini Mata exhorts us all to be as Paramahansa Yogananda wished, channels of God’s light and love to help illumine this world.

The Love and Wisdom of Paramahansa Yogananda Scroll to top