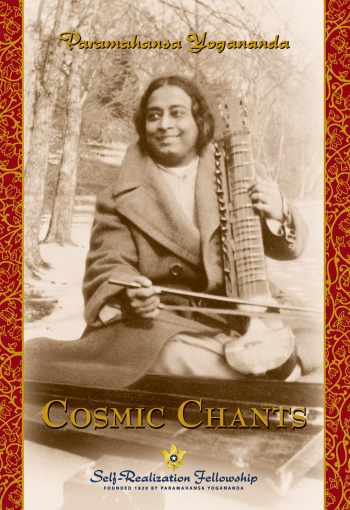 Inspired by his own direct experience of the Divine, Paramahansa Yogananda composed many songs in the tradition of India’s devotional chanting. This book contains words and music to more than fifty of his original chants.

Excerpts From the Prelude by Paramahansa Yogananda

“Popular songs are usually inspired through sentiment or passing interests. But a song born out of the depths of true devotion to God and continuously chanted, audibly or mentally, until response is consciously received from Him in the form of boundless joy, is a spiritualized song.

“Such songs like live matches produce the fire of God-awareness whenever they are struck on the foundation stone of devotion. Ordinary songs are like wet matches that do not produce any spark of divine realization.

“Each of the Cosmic Chants in this book has been spiritualized; that is, at various gatherings each song has been sung aloud and mentally until the chanters found actual response from God. It is hoped that every reader will sing these chants, not as ordinary music to please the ear or emotions, but as soul-saturated songs to be used for divine communion.