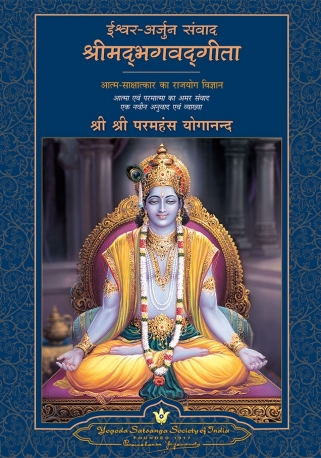 About the Bhagavad Gita

The Bhagavad Gita has been revered by truth-seekers of both the East and West, yet its deepest meaning, cloaked in allegory, has remained obscure. In God Talks With Arjuna, Paramahansa Yogananda offers a translation and commentary of unparalleled scope and vision. Exploring the Gita’s psychological, spiritual, and metaphysical depths, he reveals the innermost essence of this majestic scripture while presenting an enlightening and deeply encouraging guide to who we are, why we were created, and our place and purpose in the vast cosmic scheme of things.“The words of Lord Krishna to Arjuna in the Bhagavad Gita,” writes Paramahansa Yogananda, “are at once a profound scripture on the science of yoga, union with God, and a textbook for everyday living.”

The Great Battle of Life

Elucidating on the Gita’s primary metaphor of inner battle, Sri Yogananda writes, “From the moment of conception to the surrender of the last breath, man has to fight in each incarnation innumerable battles: biological, hereditary, bacteriological, physiological, climatic, social, ethical, political, sociological, psychological, metaphysical — so many varieties of inner and outer conflicts. Competing for victory in every encounter are the forces of good and evil. The whole intent of the Gita is to align man’s efforts on the side of dharma, or righteousness. The ultimate aim is Self-realization, the realization of man’s true Self, the soul, as made in the image of God, one with the ever-existing, ever-conscious, ever-new bliss of Spirit.”