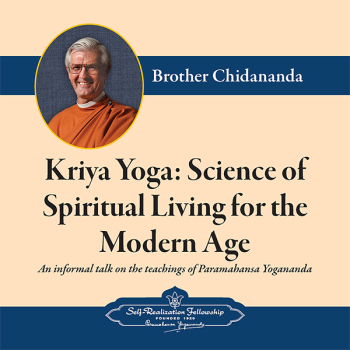 Kriya Yoga: Science of Spiritual Living for the Modern Age by Brother Chidananda is one of a series of informal talks on the teachings of Paramahansa Yogananda, author of Autobiography of a Yogi.

In this talk given at the 2016 SRF World Convocation, Brother Chidananda speaks on how to “reverse the searchlight of the senses” through Kriya Yoga, so that, in the words of Paramahansa Yogananda, we may transfer our attention “to the heart of Omnipresence, resting there forever with the hidden Joy in everything.”