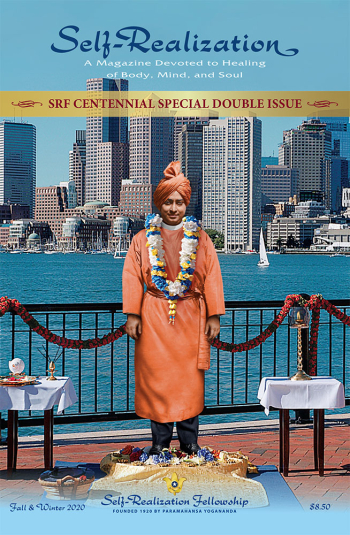 A Magazine Devoted to Healing of Body, Mind, and Soul

This “SRF Centennial Special Double Issue” takes the place of this year’s Fall and Winter issues of Self-Realization magazine. 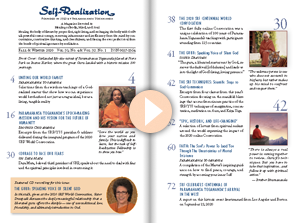 UNITING OUR WORLD FAMILY
Paramahansa Yogananda
Selections from the wisdom-teachings of a Godrealized master that show how we can experience world brotherhood not just as a vague ideal, but as a living, tangible reality

COURAGE TO FACE OUR FEARS
Sri Daya Mata
Daya Mata, beloved third president of SRF, speaks about the need to deal with fear and the spiritual principles involved in overcoming it.

Featured CD recording for this issue:
“THE GURU: SPEAKING VOICE OF SILENT GOD”
Sister Draupadi
In this talk, given at the 2020 SRF World Convocation, Sister Draupadi discusses the deeply meaningful relationship that a liberated guru offers the disciple — one of unconditional love, friendship, and ultimately introduction to God.
Running time: 57 minutes

THE 2020 SRF CENTENNIAL WORLD CONVOCATION
The first fully online Convocation was a unique celebration of 100 years of Paramahansa Yogananda’s teachings with participants attending from 115 countries.

THE GURU: Speaking Voice of Silent God
Sister Draupadi
“The guru, a liberated master sent by God, removes the dark veil [of delusion] and leads us into the light of God’s living, loving presence.”

THE SRF TECHNIQUES: Scientific Steps to God-Communion
Excerpts from four classes from this year’s Convocation focusing on the manifold blessings that accrue from sincere practice of the SRF/YSS techniques of energization, concentration, meditation on Aum, and Kriya Yoga

“EPIC, HISTORIC, AND LIFE-CHANGING”
A selection of letters from spiritual seekers around the world expressing the impact of the 2020 online Convocation

FAITH: The Soul’s Power To Lead You Through The Uncertainties of Mortal Existence
Paramahansa Yogananda
A compilation of the Master’s inspiring guidance on how to find peace, courage, and strength by accessing your inner Self

SRF CELEBRATES CENTENNIAL OF PARAMAHANSA YOGANANDA’S ARRIVAL IN THE WEST
A report on this historic event livestreamed from Los Angeles and Boston on September 19, 2020

PARAMAHANSA YOGANANDA: “A Bridge Maker of Historic Proportions”
Brother Chidananda
An SRF Centennial address discussing the state of complete soul freedom embodied by Paramahansa Yogananda, and attainable to all who practice the scientific approach to religion that he emphasized

EXPERIENCING THE TRUE MEANING OF CHRISTMAS
A Meditation With Sri Daya Mata
An outpouring of inspirations, insights, and prayers invoking the blessings of Jesus and the universal Christ Consciousness

MEETING PARAMAHANSA YOGANANDA IN 1920
Dr. M. W. Lewis
Reminiscences of the first Western disciple of Paramahansa Yogananda to be initiated into Kriya Yoga

This issue also includes a special keepsake: a laminated SRF Centennial logo with rose petal blessed in Paramahansaji’s shrine at the Mother Center.

Since 1920, Self-Realization Fellowship (SRF) has been dedicated to carrying on the spiritual and humanitarian work of its founder, Paramahansa Yogananda, widely revered as the father of Yoga in the West.

SRF is a worldwide religious organization with international headquarters in Los Angeles. The society seeks to foster a spirit of greater understanding and goodwill among the diverse peoples and religions of our global family, and to help those of all cultures and nationalities to realize and express more fully in their lives the beauty, nobility, and divinity of the human spirit.

A Forerunner of the New Race — eBook