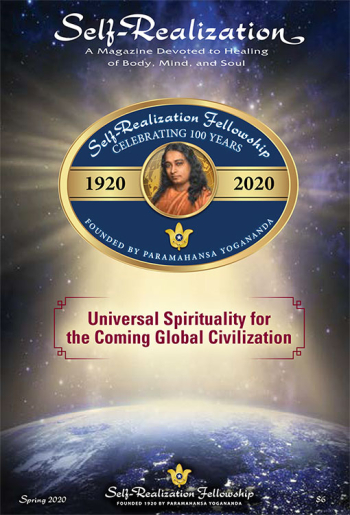 A Magazine Devoted to Healing of Body, Mind, and Soul

Featured CD: SRF at 100: Inauguration of the centennial year celebrations  by Brother Chidananda

Click below to view the entire magazine with this special flipbook edition. 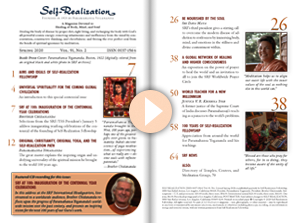 Aims and Ideals of Self-Realization Fellowship
Paramahansa Yogananda
The central theme of this special centennial issue is Paramahansa Yogananda’s vision for a harmonious and balanced world civilization, as expressed in the aims and ideals he set forth for his worldwide work.

SRF at 100: Inauguration of the Centennial Year Celebrations
Brother Chidananda
Selections from the SRF/YSS President’s January 5 address inaugurating yearlong celebrations of the centennial of the founding of Self-Realization Fellowship

Be Nourished by the Soul
Sri Daya Mata
SRF’s third president gives a stirring call to overcome the modern disease of addiction to restlessness by immersing body, mind, and emotions in the stillness and divine contentment within.

World Teacher for a New Millennium
Justice V. R. Krishna Iyer
A former justice of the Supreme Court of India discusses Paramahansaji’s teaching as a panacea to the world’s problems.

Featured CD recording for this issue:
“SRF at 100: Inauguration of the centennial year celebrations”
Brother Chidananda
Excerpts from the talk by Brother Chidananda at the SRF International Headquarters, livestreamed to a worldwide audience.

Since 1920, Self-Realization Fellowship (SRF) has been dedicated to carrying on the spiritual and humanitarian work of its founder, Paramahansa Yogananda, widely revered as the father of Yoga in the West.

SRF is a worldwide religious organization with international headquarters in Los Angeles. The society seeks to foster a spirit of greater understanding and goodwill among the diverse peoples and religions of our global family, and to help those of all cultures and nationalities to realize and express more fully in their lives the beauty, nobility, and divinity of the human spirit.