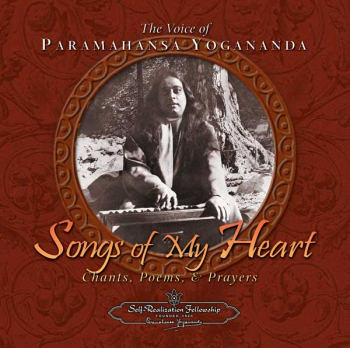 Songs of My Heart

“Music that is saturated with soul force is the real universal music, understandable by all hearts.”
—Paramahansa Yogananda

Paramahansa Yogananda, author of the spiritual classic, Autobiography of a Yogi, is considered one of the preeminent spiritual figures of our time. In the closing years of his life, recordings were made of Yogananda singing Indian devotional chants and some of his own compositions, as well as reciting poems and prayers. This CD recording combines all of the selections from two previously published audiocassettes, and also features, for the first time, the chant, “Divine Mother’s Song to the Devotee.”
1. Prayer at Dawn
2-3. O God Beautiful!
4-5. Hay Hari Sundara!
6-7. What Lightning Flash!
8. God, Christ, Gurus
9. Prayer at Noon
10. The Hound of Heaven
11-12. Cloud-Colored Christ
13. Divine Mother’s Song to the Devotee
14-15. In the Temple of Silence
16. Song of India
17-18. Shanti Mondire
19-20. Prayer at Eventide and chanting of Aum
21-22. I Will Be Thine Always (English)
23-24. Main Tera Hamesha
25-26. Do Not Dry the Ocean of My Love
27-28. Prayer at Night and chanting of Aum

A natural poet and musician, Paramahansa Yogananda was probably the first to provide English words and Western musical notation for many of India’s traditional hymns and bhajans (devotional songs). He also composed many of his own chants. “In India,” wrote Paramahansaji, “poetry and music have always gone hand in hand. In the West the composer writes the music, and the poet adds the words, but the Indian melody and song are one….The profound aim of Indian music is to blend the singer with the Cosmic Song, the creature with his Creator.” In his book Cosmic Chants, from which the musical renditions in this recording are taken, Sri Yogananda wrote: “Sound or vibration is the most powerful force in the universe. Music is a divine art, to be used not only for pleasure but as a path to God-realization. Vibrations resulting from devotional singing lead to attunement with the Cosmic Vibration or the Word. ‘In the beginning was the Word, and the Word was with God, and the Word was God’” (John 1:1). When a chant is sung to the Lord with sincerity and deep concentration, the words become saturated with intuitive conviction and realization. They are then, Paramahansaji tells us, “like highly explosive vibration bombs that have the power to remove the rocks of difficulties and to create the change desired.” “Chanting with ever-increasing devotion,” he often said, “brings God-communion and ecstatic joy, and through these healing of body, mind, and soul.”

Those who join in thought and feeling with Paramahansa Yogananda will find that listening to these chants and prayers imbues the heart with deep spiritual peace and an awareness of the Divine Presence.

With the exception of “Song of India,” the selections in this volume were recorded during impromptu gatherings at the Self-Realization Fellowship’s international headquarters in Los Angeles, under conditions far removed from those of a professional recording studio. However, sound quality and clarity have been enhanced through the use of modern technology and equipment.

The chants, as originally recorded on 78 r.p.m. records, each lasted for approximately three minutes. Subsequently, many listeners expressed a wish for longer periods of chanting to help them deepen their devotional concentration before meditation. Therefore, for these recordings some of the chants have been lengthened (by repetition) to several minutes. (It is not uncommon in Indian chanting to repeat a song, or perhaps just a line of it, over and over for periods of ten minutes to an hour, continuously increasing the devotional intensity.)

Paramahansa Yogananda plays the harmonium (a small, hand-operated reed organ) as he sings. Other accompaniment consists of the mridanga (a long drum of clay or wood) and kartal (a pair of small flat hand cymbals).

Note: For convenience in programming an audio player for extended repetition of a musical selection, we have listed several of the chants as two tracks. The first track is Paramahansa Yogananda’s spoken introduction to the selection, and the second track is the music.

After you have completed the checkout process, you will be given a link to download the audio files in mp3 format to your device. You will also receive this link in an email. The files in this download are zipped files.

Autobiography of a Yogi — eBook
Scroll to top