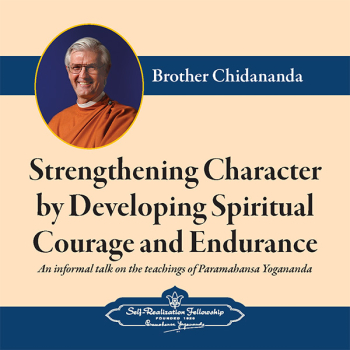 Strengthening Character by Developing Spiritual Courage and Endurance by Brother Chidananda is one of a series of informal talks on the teachings of Paramahansa Yogananda, author of Autobiography of a Yogi.

In this talk given at the 2015 SRF World Convocation, Brother Chidananda leads attendees in a series of powerful affirmations – “thoughts of immortality” – from Paramahansa Yogananda’s teachings, and offers encouragement for successfully facing life’s difficulties.

• Dealing with our trials with the right attitude

• Affirmations to cultivate “thoughts of immortality”

• Developing courage in our lives

• Importance of endurance in our spiritual practice