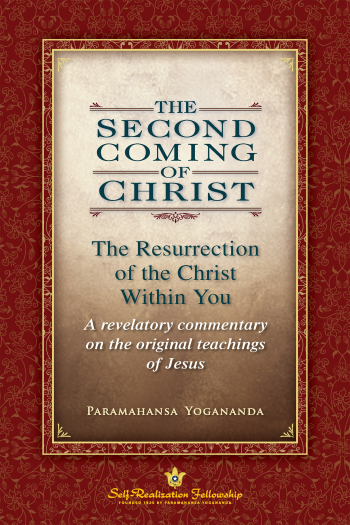 The Second Coming of Christ — Paperback

In this unprecedented masterwork of inspiration, Paramahansa Yogananda takes the reader on a profoundly enriching journey through the four Gospels. Verse by verse, he illumines the universal path to oneness with God taught by Jesus to his immediate disciples but obscured through centuries of misinterpretation: how to become like Christ, how to resurrect the Eternal Christ within ones self.

In this unprecedented masterwork of inspiration, Paramahansa Yogananda takes the reader on a profoundly enriching journey through the four Gospels. Verse by verse, he illumines the universal path to oneness with God taught by Jesus to his immediate disciples but obscured through centuries of misinterpretation: how to become like Christ, how to resurrect the Eternal Christ within one’s self.

This landmark work transcends divisive sectarianism to reveal a unifying harmony underlying all true religions. A groundbreaking synthesis of East and West, it imparts the life-transforming realization that each of us can experience for ourselves the promised Second Coming — awakening of the all-fulfilling Divine Consciousness latent within our souls.

Yogananda said, “In titling this work The Second Coming of Christ, I am not referring to a literal return of Jesus to earth. He came two thousand years ago and, after imparting a universal path to God’s kingdom, was crucified and resurrected; his reappearance to the masses now is not necessary for the fulfillment of his teachings. What is necessary is for the cosmic wisdom and divine perception of Jesus to speak again through each one’s own experience and understanding of the infinite Christ Consciousness that was incarnate in Jesus. That will be his true Second Coming.

“A masterpiece of spiritual revelation....As Yogananda delves into the life and background of Jesus, it becomes clear that the Gospels contain a universal esoteric message that has been awaiting full and systematic explication since the apostolic age. In Yogananda’s commentary, what had been veiled, obscure, and oblique is fully disclosed.”—Yoga International

“Offers startling ideas about the deeper meaning of Jesus’ teachings and their essential unity with yoga....It has been praised as a groundbreaking work by comparative religion scholars.”—Los Angeles Times

“Paramahansa Yogananda’s The Second Coming of Christ is one of the most important analyses of Jesus’ teachings that exists....Many interpretations of Jesus’ words divide peoples, cultures, and nations; these foster unity and healing, and that is why they are vital for today’s world.”—Larry Dossey, M.D., author of Healing Words: The Power of Prayer and the Practice of Medicine

The Second Coming of Christ — Hardback

The Law of Success
Scroll to top