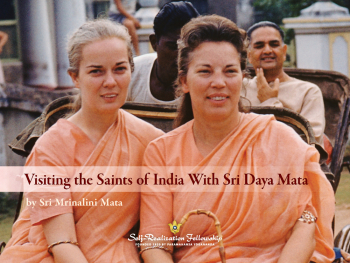 Visiting the Saints of India With Sri Daya Mata

Visiting the Saints of India With Sri Daya Mata takes the reader on an unforgettable spiritual pilgrimage. Recounted by Sri Mrinalini Mata—one of Paramahansa Yogananda’s foremost disciples and president and spiritual head of Self-Realization Fellowship/Yogoda Satsanga Society of India from 2011 until her passing in August 2017—the book chronicles many of her profound experiences during a prolonged trip to India in the early 1960s.

The fascinating narrative is complemented by dozens of vivid and soul-stirring photographs (many taken by Sri Ananda Mata, sister of Sri Daya Mata) and several taken by Mrinalini Mata herself.