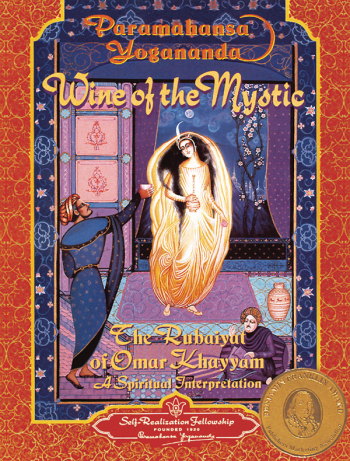 Wine of The Mystic — Quality Paperback

The Rubaiyat of Omar Khayyam: A Spiritual Interpretation

This award-winning work brings to light the deeper truth and beauty of a well-loved but long-misunderstood masterpiece—The Rubaiyat of Omar Khayyam. With an in-depth commentary on every quatrain, Paramahansa Yogananda reveals the profound kinship between the Rubaiyat’s hidden metaphysical philosophy and India’s ancient science of yoga.

Praise for Paramahansa Yogananda’s Wine of the Mystic…

— Winner of the 1994 Benjamin Franklin Award in the Field of Religion —
“A glowing spiritual interpretation....Highly recommended.”
—LIBRARY JOURNAL

“Richly illustrated....Paramahansa Yogananda explores the riddles of life, death, karma, reincarnation, and free will....Named the best book [of 1994] in the field of religion by Publishers Marketing Association.”
—LOS ANGELES TIMES

“All seekers will appreciate Yogananda’s clear discussion on such topics as karma, reincarnation, destiny and free will, maya, meditation, perfecting love, life’s problems, true security, the cosmic drama, and more. Yogananda’s spiritually illuminating commentary...is a living treasure which can be read and reread, for each reading will unveil another truth in the infinite mystery of life.”
—YOGA INTERNATIONAL

“The book is a shaft of sunshine....Yogananda predated scholarly opinion by decades in recognizing Khayyam as a Sufi [mystic]....His wish was not to prove or disprove a point of controversy but rather to show the way to God.”
—INDIA-WEST

“Wine of the Mystic is truly intoxicating…an immense source of comfort and inspiration.”
—NANI A. PALKHIVALA
Former Ambassador of India to the United States

“At a time when interreligious disharmony is more the norm rather than the exception, Paramahansa Yogananda’s book works as a soothing balm....An eye-opening spiritual interpretation.”
—INDIA JOURNAL

“A book to be savored over and over again....I defy anyone to open and read this book without being moved.”
—FRIEND’S REVIEW

“A magic carpet ride through Persian poetry, spirituality, and smashing artwork....Will change the way the Rubaiyat is read.”
—THE PALM BEACH POST

“A work of art....Everything about [Wine of the Mystic] bespeaks the yogic teachings which it embodies.”
—HINDUISM TODAY

“Yogananda presents a fascinating journey into little-known realms of mystical experience….Full of truth and depth…makes the joys of Spirit seem [as] attainable as the more familiar pleasure of the senses and infinitely more alluring.”
—NEWS INDIA-TIMES

“A compelling, meticulous excursion into light.”
—THE BOOK DEALER

Wine of the Mystic — Hardback