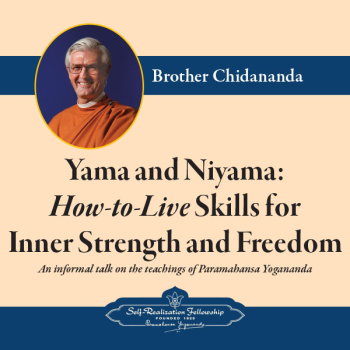 Yama and Niyama: How-to-Live Skills for Inner Strength and Freedom by Brother Chidananda is one of a series of informal talks on the teachings of Paramahansa Yogananda, author of Autobiography of a Yogi.

This talk was given by Brother Chidananda at the 2011 Self-Realization Fellowship World Convocation in Los Angeles, California. Brother Chidananda speaks on yama and niyama (the spiritual “do’s and don’ts”) – the universal rules of moral behavior that we find in the scriptures of all the great religions of the world.

Finding Soul Guidance to Navigate the Maze of Life’s Experiences –...

Renewing Our Relationship With God: The Power of Prayer and Affirmation –...
Scroll to top