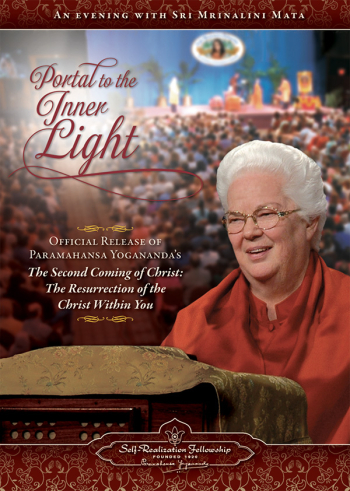 On August 1, 2004, at the opening program of Self-Realization Fellowship’s World Convocation, Sri Mrinalini Mata conducted the official release of Paramahansa Yogananda’s monumental commentary on the four Gospels:  The Second Coming of Christ: The Resurrection of the Christ Within You.  This recording captures the joy and profound inspiration conveyed at that milestone event.

Highlighting the universal principles of yoga (union with God) taught by Jesus Christ in the New Testament and by Lord Krishna in the Bhagavad Gita, this talk beautifully conveys the essence of Paramahansa Yogananda’s mission of spiritually uniting East and West. Mrinalini Mata illustrates how Paramahansaji personally speaks to receptive souls through his writings — and how they have the power to change our consciousness. If we read and digest his living words in these commentaries on the scriptures, we will find them to be portals to the inner light of divine consciousness – and to the ultimate goal: realization of our own oneness with God.

In His Presence — Digital Rental